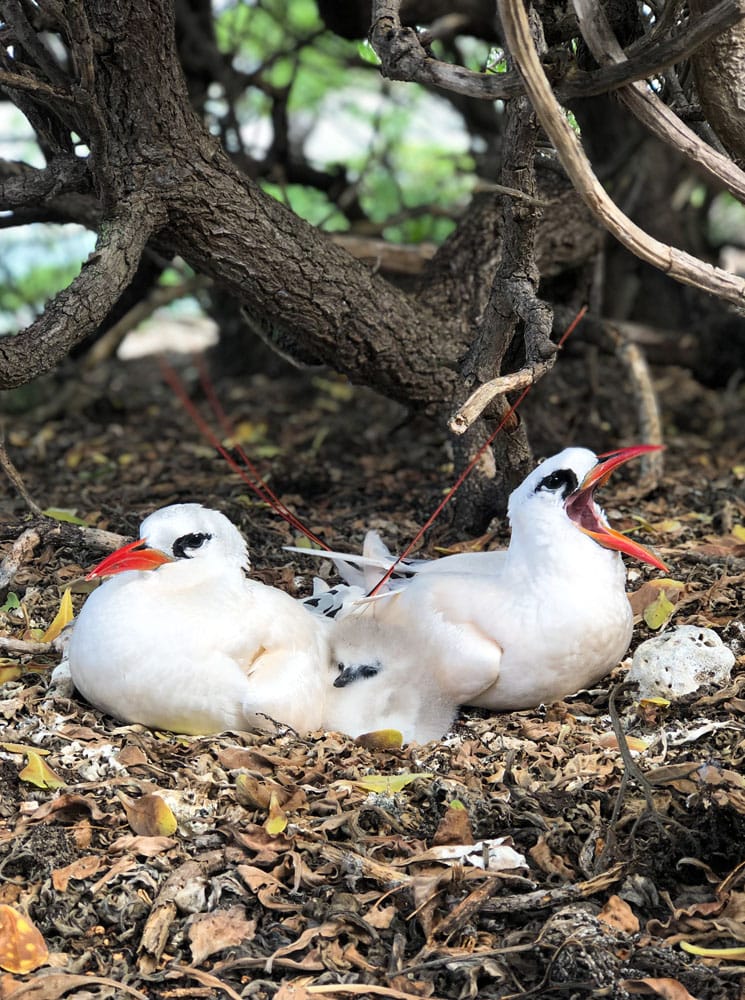 This week we welcomed the newest addition to our colony of Red-Tailed Tropic Birds (Phaethon rubricauda) who has been dubbed “Oscar”. These birds have been nesting on the island for at least the last 25 years and are a special part of the Lady Elliot family. If you visited the island in 2020 you may have seen Patrick as a chick or a juvenile, well Oscar is his younger sibling! Unfortunately, we are unable to visually differentiate between male and female, so our naming regime is just a guessing game with input from resort guests, which is how we ended up naming one of our chick’s “Marshmallow” but trust us- the name definitely suited the little fluff ball! 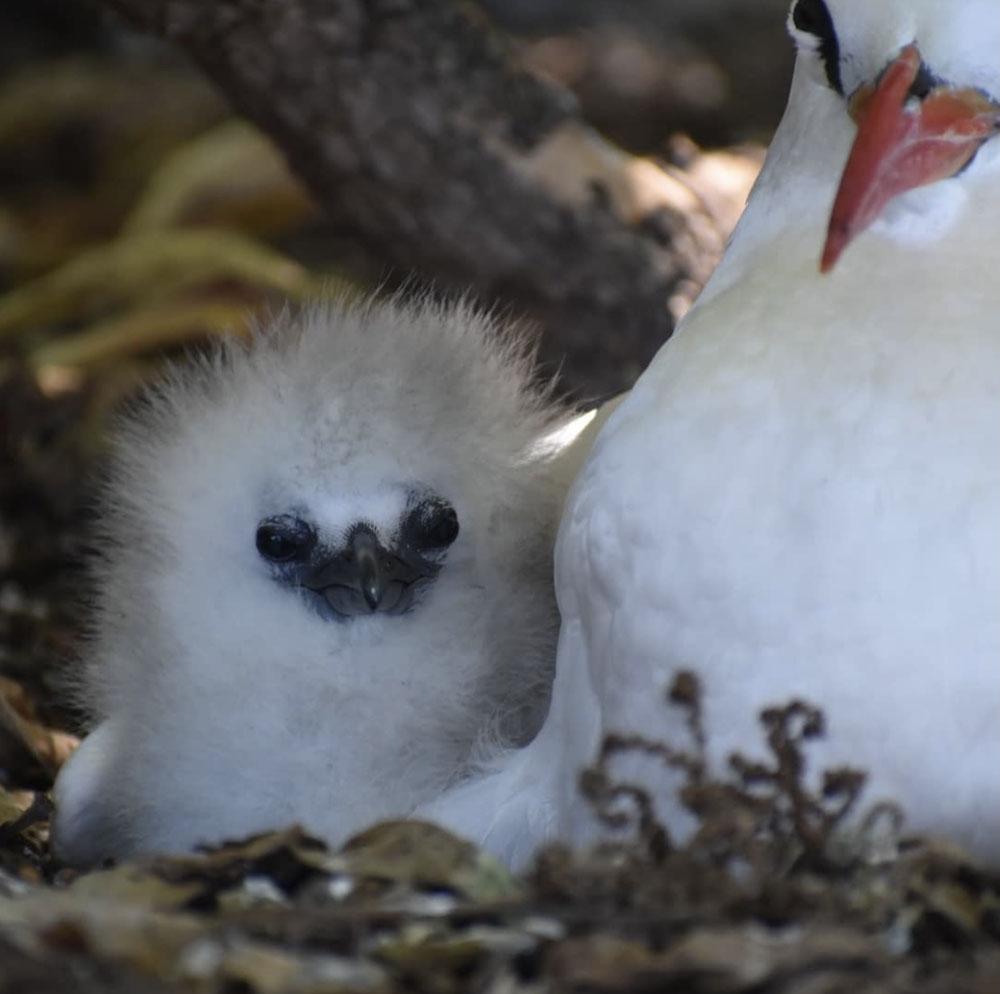 As part of the Great Barrier Reef Foundations ‘Reef Islands Initiative’, The University of the Sunshine Coast (USC) is leading a project based on the island called ‘Leaf to Reef: The Biodiversity of Lady Elliot’. This multi-disciplinary team was able to tag 12 individuals, take DNA samples and accurately record patterns in feeding and nesting behaviour while on the island in June 2020. This information will hopefully lead to a deeper understanding of their migration and nesting preferences as there is relatively little known about this rather eye-catching species. One big mystery is where they go after fledging and how related the birds are to one another.  Dr. Dominique Potvin from Leaf to Reef commented: “We are going to take DNA samples to see how they might be related” as well as utilising satellite tags to establish how far they go to feed and where they go for their other offshore activities. 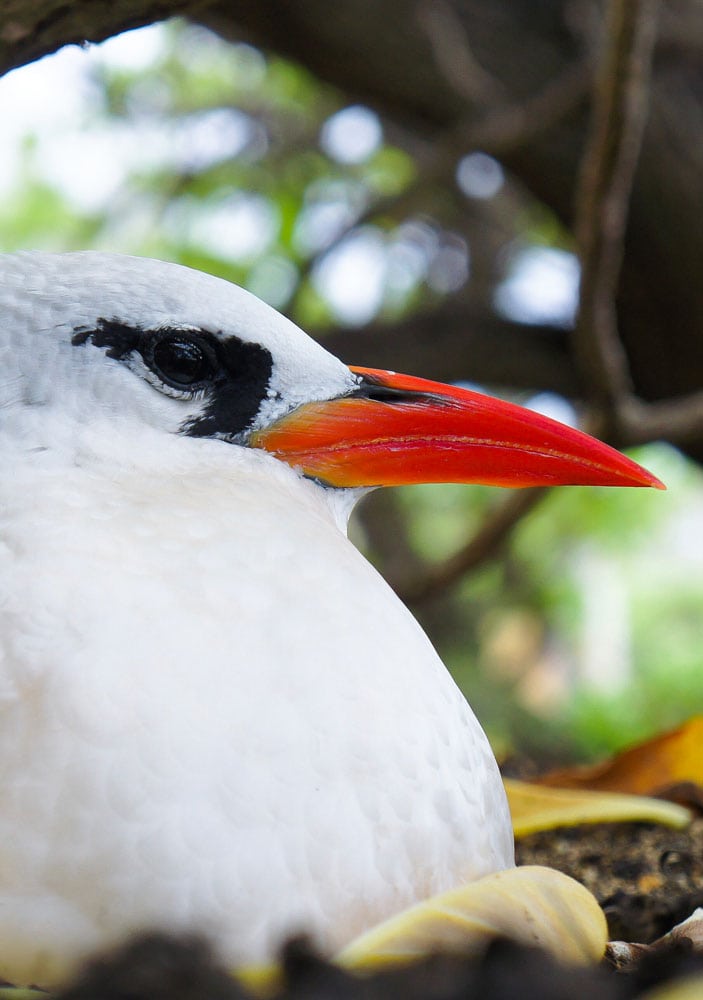 Seeing these birds on the island is made all the more special when you learn that they spend the vast majority of their life at sea, and only return to land in order to nest. Last year the team made a breakthrough when they examined an existing metal band on an adult bird and discovered it had been nesting on Lady Elliot for the last 23 years, making it so far, the oldest known breeding individual in the world! The band was applied during a Queensland National Parks program in the nineties- “Their old records showed it was first tagged as a chick in 1997, which possibly makes it the oldest known active breeding Red-tailed Tropicbird in the world,” Dr Kathy Townsend said. This individual and its partner construct a nest on the ground, year after year, within centimetres of their original nest and in 2020 they brought Marshmallow into the world who was a favourite among many of the island staff and guests alike.

A few notes if you encounter these beautiful birds on Lady Elliot:

If you would like to learn more, jump onto our Bird Watching or Island Discovery walking tours where our friendly guides will take you to the nest sites and share further knowledge on this incredible species!