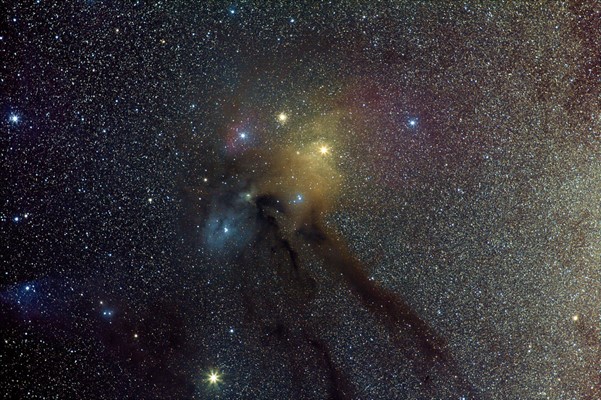 Five to six times a year, we invite Professor Jonti Horner out as part of our guest speaker program to share his extensive knowledge on Astronomy. If you have already had the pleasure of meeting Jonti, you will know he is very passionate and knowledgeable about all-things space and will happily share with you what he knows (and has personally discovered!) Read on for an insight into his successful career and why Lady Elliot is among his favourite places on Earth! 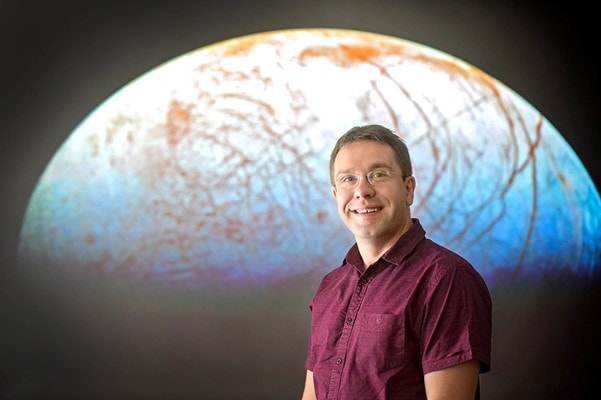 What is your background and why are you passionate about Astronomy?

Whilst I’m now officially an Aussie (yay!), I grew up a long long way away. I’m originally from the north of England – from West Yorkshire – and it’s been an amazing journey from there to living and working here in southeast Queensland. I got really lucky as a kid in that I discovered my love for astronomy when I was young enough to do something about it, which meant that I’ve had the opportunity to make my hobby into my job. I always think that’s one of the most amazing gifts you can be given – to get the opportunity to do what you love all day, every day – and I’m sure that’s something with which the staff on Lady Elliot could totally agree!

I got hooked on astronomy at the age of five – all by accident. My parents recorded something for me on the TV (none of us can remember what it was!), and accidentally also recorded a bit of a UK TV show called ‘The Sky At Night’ – a program all about astronomy. That was enough to get me hooked – and I’ve been mad for space ever since! I joined my local astronomy society at the age of eight, and am still a member (and currently the honorary President), despite having moved to Australia. At the society I saw regular talks from professional astronomers from across the UK – and the scientists who came and talked to us were wonderful in helping me work out how to turn my passion into a career – guiding me on where I should study, and what subjects I should take.

Can you share some of the discoveries you have made?

I’ve been lucky enough to be involved with lots of cool research through the course of my career. I’ve helped to discover alien worlds (planets orbiting stars other than the Sun) and helped us to better understand the history of the Solar system. But the work I’m perhaps most proud of was done a bit more than a decade ago, during my time at the Open University, in the UK. Whilst there, I worked with my dear friend and mentor, Prof Barrie Jones (who, sadly, is no longer with us), looking into the idea that Jupiter might protect the Earth from impacts, helping to make our planet more suitable for life. Whilst that is a widely held belief, our work showed that it simply isn’t true. Rather than being Earth’s knight in shining armour, Jupiter’s role is much more sinister and two faced. Instead of protecting us from impacts, Jupiter is responsible for many of the objects that collide with the Earth being flung our way in the first place!  I actually wrote an article about that last year, whilst at Lady Elliot, which was published on SpaceAustralia.com — here’s a link: https://spaceaustralia.com/feature/jupiters-complicated-relationship-life-earth .

What is special about Lady Elliot and what makes you come back?

Lady Elliot is my favourite place on the whole planet – it’s just amazing. I’ve never been anywhere else on the planet where I relax as easily or as quickly as I do on this magical island – there’s just something amazing about the place. I love being in the water – and seeing all the amazing wildlife, and despite the fact I’ve been out so many times, there’s always something new to see. A couple of years ago, I was on a snorkel safari when a group of ten humpbacks swam over to check us out, and earlier this year I got to swim with Bubbles the dolphin, along with his partner and their baby, which was just astonishing. And they’re just two of the recent highlights

What does a night as a guest speaker run like for you?

On a typical evening, I’ll give an hour long talk in the Education Centre – about the risk to Earth from Rocks from Space, or about the work we do at USQ searching for alien worlds. Then, if skies are clear, I’ll take anyone interested out onto the runway, away from the lights, and spend an hour or two observing the night sky – teaching people the constellations, watching for meteors (shooting stars), and answering any questions people might have. I’ll stay out there for as long as people stay with me – so I’m often out there until 10pm, or even later, before people make their sleepy way back to their rooms to sleep. Then the next day, I do it all again. It’s fair to say my trips to Lady Elliot are always the highlights of my year! 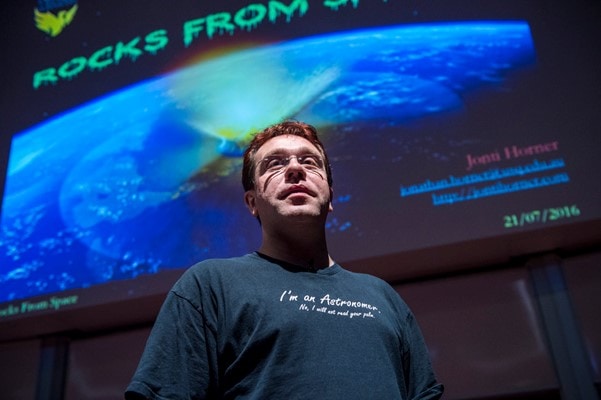 Which stars or constellations are visible on the island and what are the best conditions for stargazing?

As with anywhere on Earth, the constellations you can see from Lady Elliot vary with the seasons. Although we’re in the southern hemisphere we’re not that far south – just 24 degrees south of the equator. That means that we get to see a good number of northern hemisphere constellations, as well as those in the southern sky. What always feels a bit weird to me is that the constellations I know and love from my youth – those in the northern sky – all appear upside down from Lady Elliot, compared to how they appeared from Yorkshire. That’s taken some getting used to, even though I’ve been in Australia for more than a decade now!

When it comes to constellations. the highlight of the year for me are the winter skies from Lady Elliot. At that time of year, we seem to get more clear nights than in the summer – and it’s a great time to observe the southern sky. The centre of our galaxy, the Milky Way, is almost directly overhead on winter evenings from the island, making it the perfect time to see the Milky Way – with Scorpius and Sagittarius spectacular overhead, and the southern cross (Crux Australis) and the pointers (Alpha and Beta Centauri) high in the south.

The summer brings us other treats, though – Orion is high in the north in the summer sky, surrounded by Taurus, the bull, and his hunting dogs, Canis Major and Canis Minor. But the best astronomical event of the year comes along each summer – the Geminid meteor shower, which peaks around the 13th and 14th of December. I always make sure I’m on the island that week, to lie out under the stars and watch the meteors rain down! The Geminids are the best meteor shower of the year – and whilst they do put on a better show if you’re in the northern hemisphere than that we see here at Lady Elliot, they’re still a spectacular sight from our magic island. The fireworks start at around 9:30pm, when the first few Geminids are visible, streaking out of the north-east. The later in the night you stay up, the better the show gets – with peak rates around 2am. It’s hard to stay up that late after all the swimming I get in on the island, though – but I’ve regularly seen more than fifty meteors in a few hours before falling asleep on the night of Geminid maximum from the island.

Lady Elliot is a great place to see the night sky because we’re so far away from the light pollution that plagues the mainland, particularly in the major cities. That means the skies on the island are amazingly dark (when the Moon isn’t above the horizon!), making it a fantastic place to do astronomy. The only drawback is that the air is often quite humid around the island (since it is surrounded by nice warm ocean) – which means that the night sky isn’t quite as spectacular as it would be in the middle of a desert – in the middle of the Nullabor, for example. But the skies at Lady Elliot are still amongst the darkest and clearest I’ve ever seen – and they come packaged with a magical island surrounded by a glorious ocean full of amazing things to see during the daytime. That’s why Lady Elliot is still my favourite place to do astronomy – as well as my favourite place on the whole planet!

You can find more information about our guest speaker program on our website at https://ladyelliot.com.au/guest-speaker-program/

Read about Jonti’s fascinating work on his website at https://www.jontihorner.com/