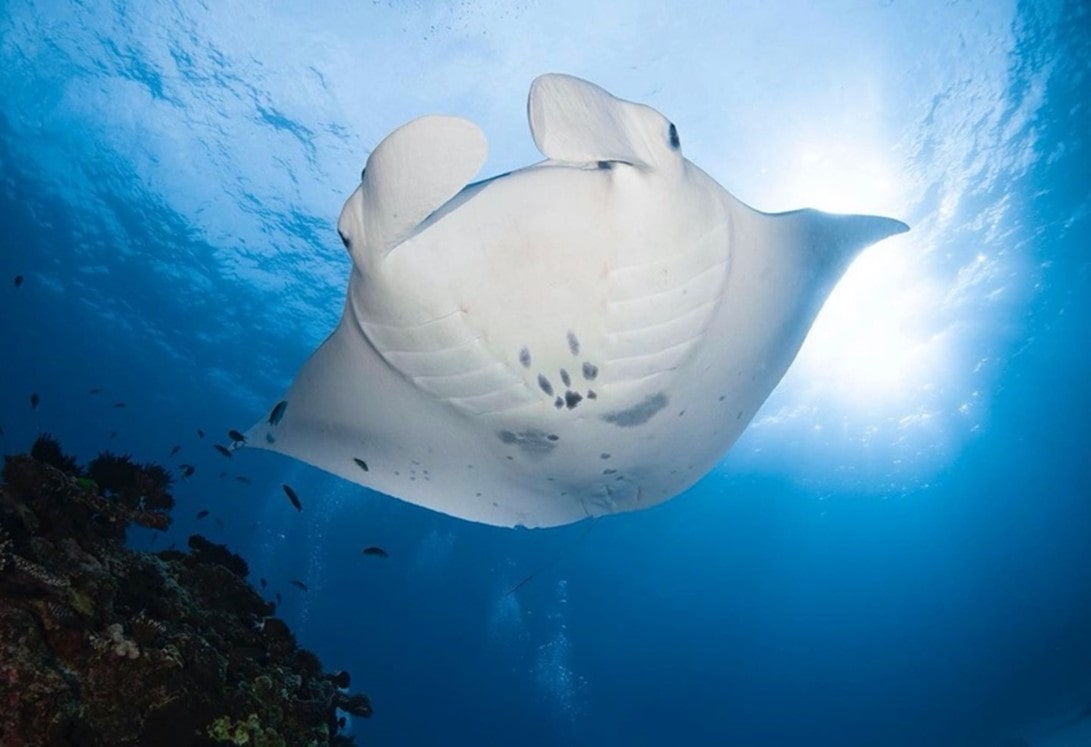 Welcome to the wonderful world of rays on Lady Elliot Island! These animals are some of the Great Barrier Reef’s most sophisticated and fascinating residents so we are here to shed some light on the species you can expect to see around this coral cay!

Likelihood of sighting: Very likely during winter as this is peak season, sightings also occur year-round.

Information: These gentle giants can reach wingspans of up to 5 m but lack a stinging barb or any sharp teeth. Behaviours witnessed at Lady Elliot include feeding which is generally seen on the surface of the water as they open their mouth wide to ingest plankton. Courtship often takes place in the form of a “manta train” as one female is followed by several males. Cleaning involves small fish picking parasites and dead skin from the manta rays and occurs at coral bommies (as seen in the above image). 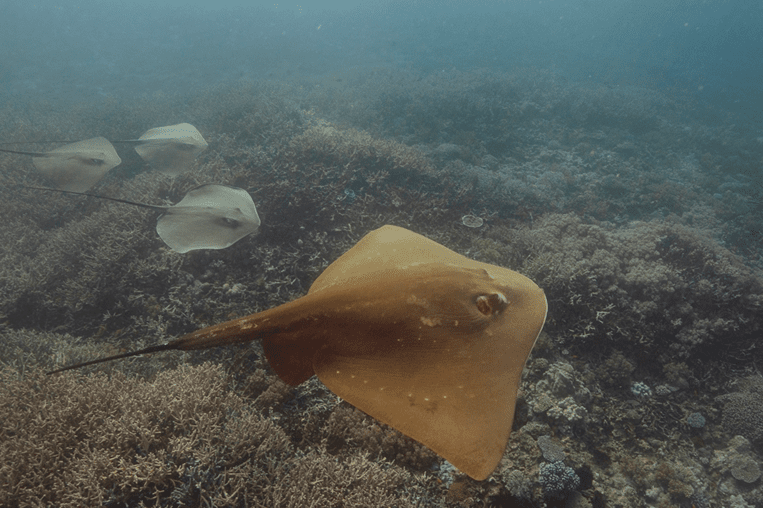 Likelihood of sighting: Very rare, we believe that this is one individual that visits the island on occasion, it is sighted around 3-4 times a year.

Location of image: Diving on Western side of the Island.

Information: The smalleye stingray is classified as “data deficient” and is the largest marine stingray but also regarded as the rarest. Spot patterns have recently been deemed stable to be used in long-term photo-identification studies, meaning that images of this ray are important! They can reach a disc width of 2.2 m and overall length of 3.2 m and have been sighted several times at 45 degree bommie. 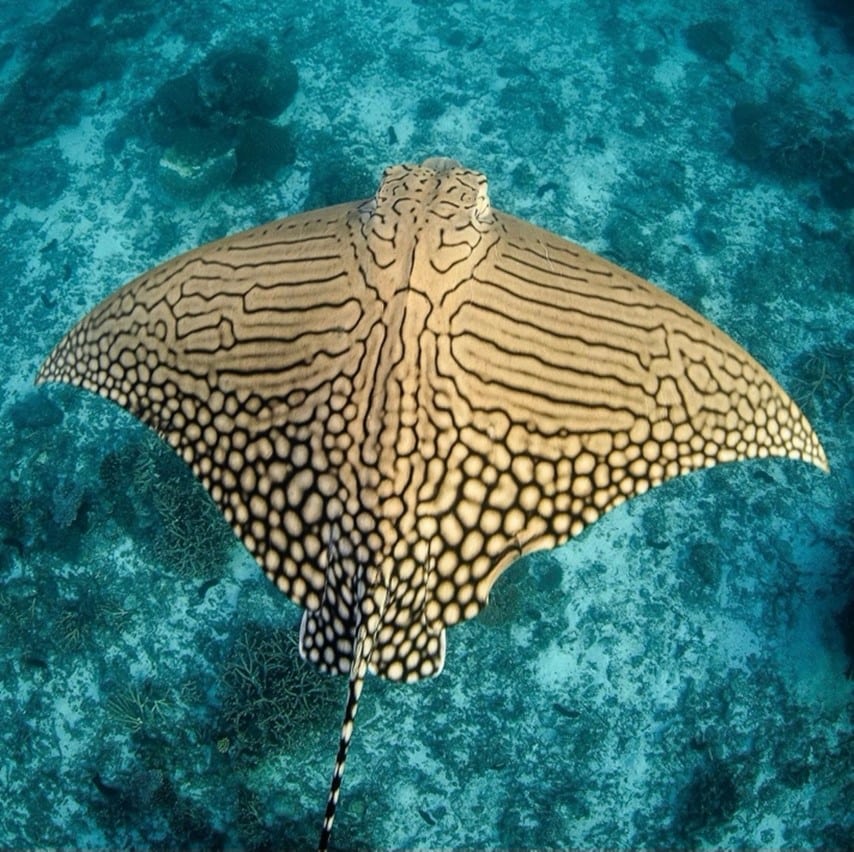 Likelihood of sighting: Quite rare, there are less than sixty recorded sightings in the world BUT the team at Lady Elliot are keeping a close eye on the number of individuals and believe there have been around 10 different individuals sighted around the island.

Location of image:  Western side of the island, approx. 12 m depth

Information: The Ornate eagle ray is the largest of the eagle rays and does not possess a stinging barb. These rays can reach a disc width of 2.4 m and if their tail is unbroken, a length of up to 4 m. The species has undergone a rapid population decline in the last 100 years meaning each sighting is very valuable. We can also identify individual animals from their dorsal spots, so each photograph is important. 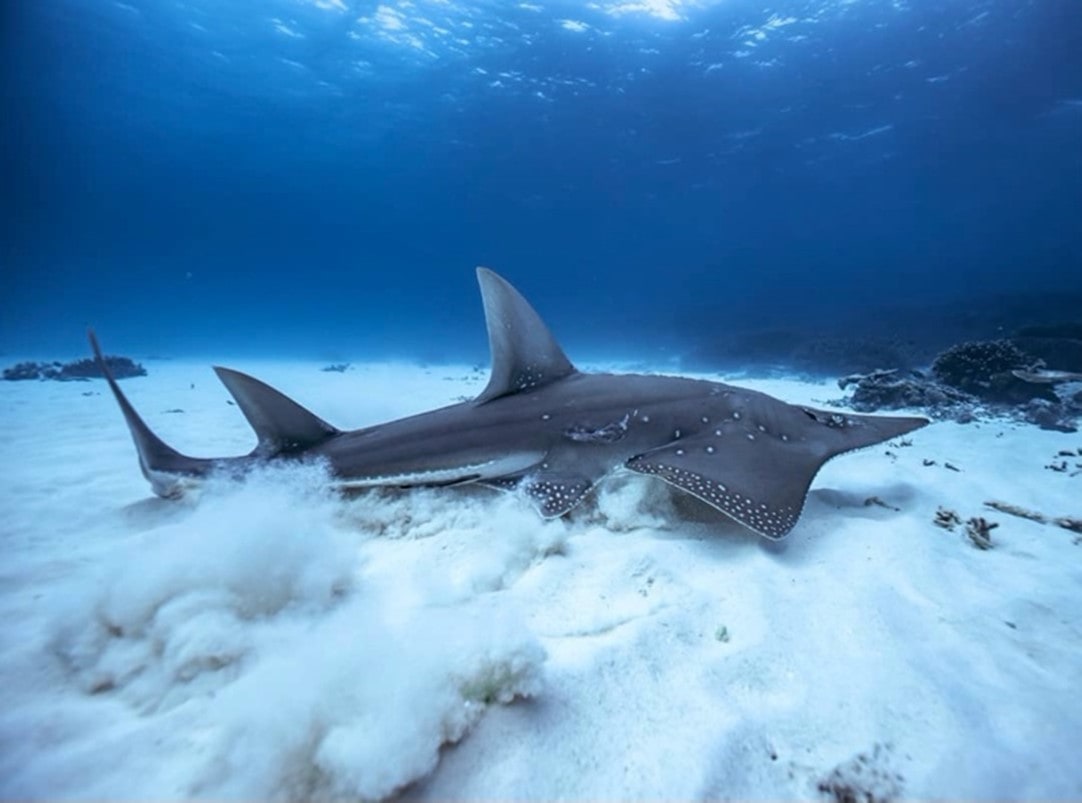 Likelihood of sighting: Quite common. These rays are often sighted on large expanses of sand in the early morning and late afternoon. Larger individuals have been sighted out in deeper water.

Location of image: Western side sand patch between Lighthouse Quayway and Second Reef.

Information: Known by a plethora of common names, these interesting looking rays spend much of their time on the sandy sea floor. The rays gill slits and mouth are located on the underside with its mouth consisting of bony plates to crush invertebrates. These rays can reach up to three metres in length. 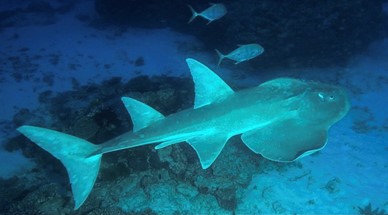 Likelihood of sighting: Very rare, in the last four years there have been approximately 5 sightings of this species.

Information: The Bowmouth ray feeds on bony fish, molluscs and crustaceans and is generally sighted in deeper water at Lady Elliot. The ray has thorns on its head which may assist in defence from predators such as tiger sharks. Unfortunately, in many areas these rays are caught in fishing nets with their fins highly prized for shark fin soup. 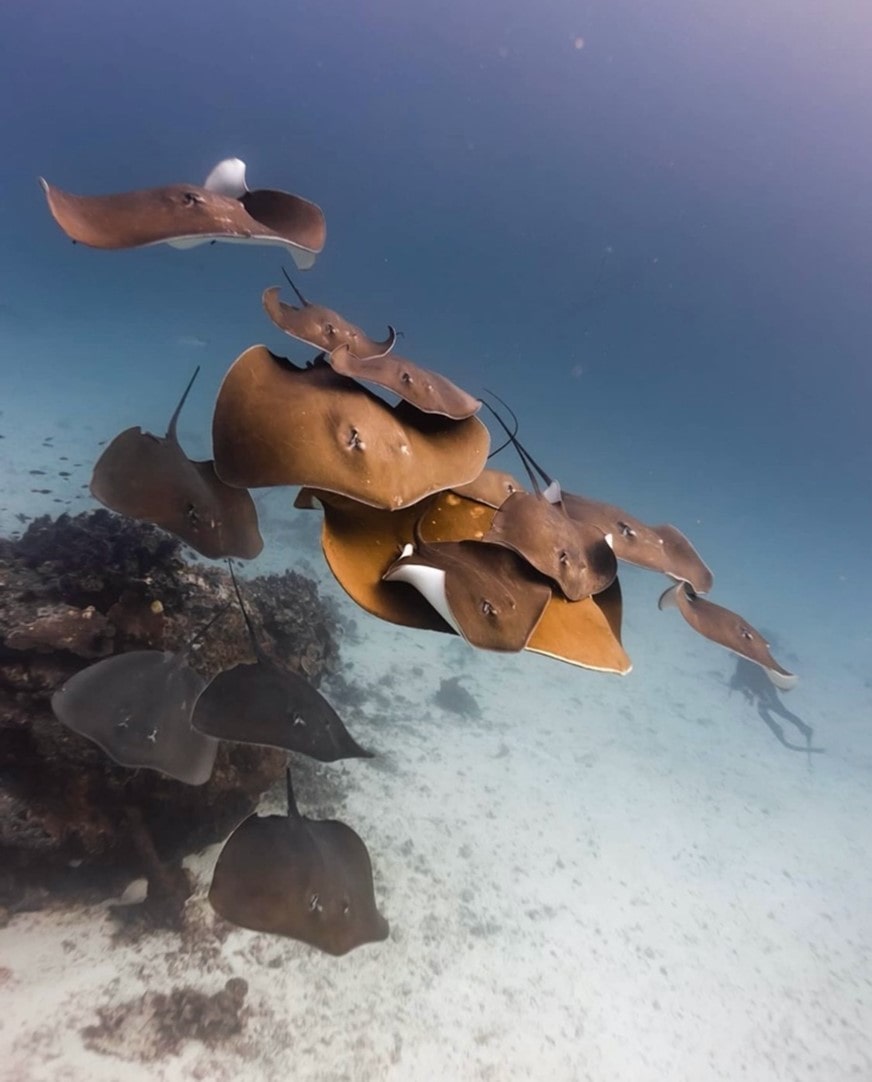 Likelihood of sighting: These rays are seen quite frequently resting on the seafloor on sandy areas such as along the lighthouse snorkelling line. They remain still for hours, with the eyes, spiracles, and tail easily visible but part of the body covered in sand.

Location of image: 45 degree bommie on the western side.

Information: Several species of whipray are sighted at Lady Elliot including the Leopard whipray (H. leoparda), Pink whipray (H. fai) and the Australian whipray (H. australis). These species (other than the pink whipray) are covered in intricate patterns on their dorsal side. The Pink whiprays have been sighted “piggybacking” the smalleye stingray in a behaviour that is not well understood (see image above). 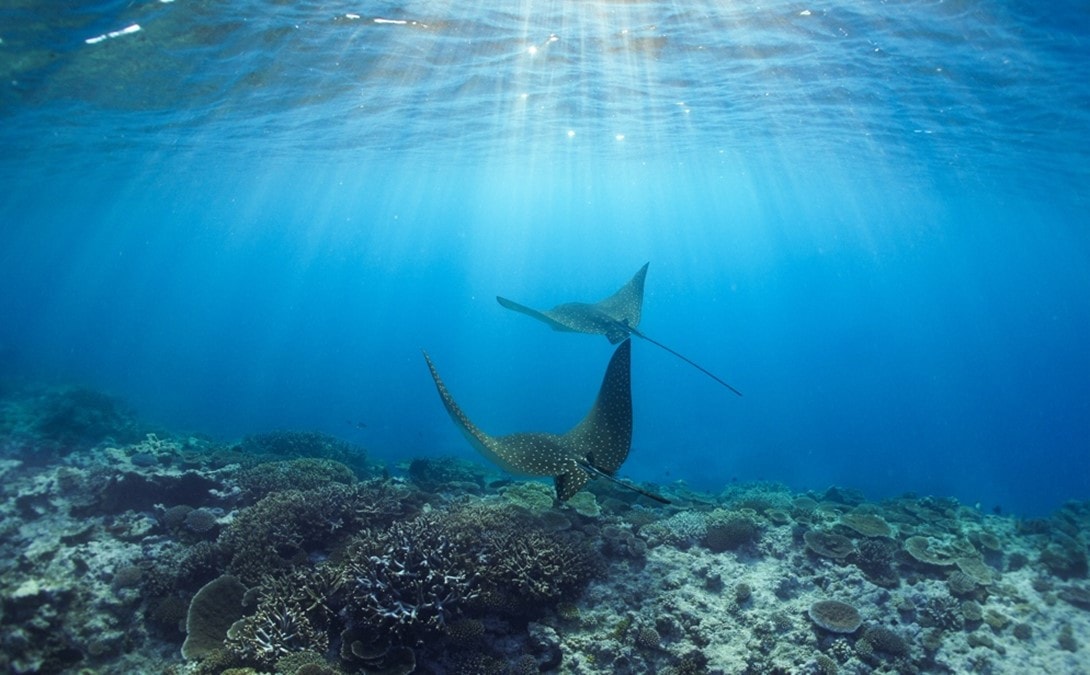 Likelihood of sighting: Likely – these rays are quite prevalent around the island and are generally placid if you stay calm and relaxed in the water.

Information: These rays each have different spot patterns. They have between 1-6 stinging barbs located at the base of their tails but are generally unbothered by humans. They are sighted in deep water in large fevers, all the way to the shore in less than 1 m of water. Fevers of over 50 have been sighted at Lady Elliot. 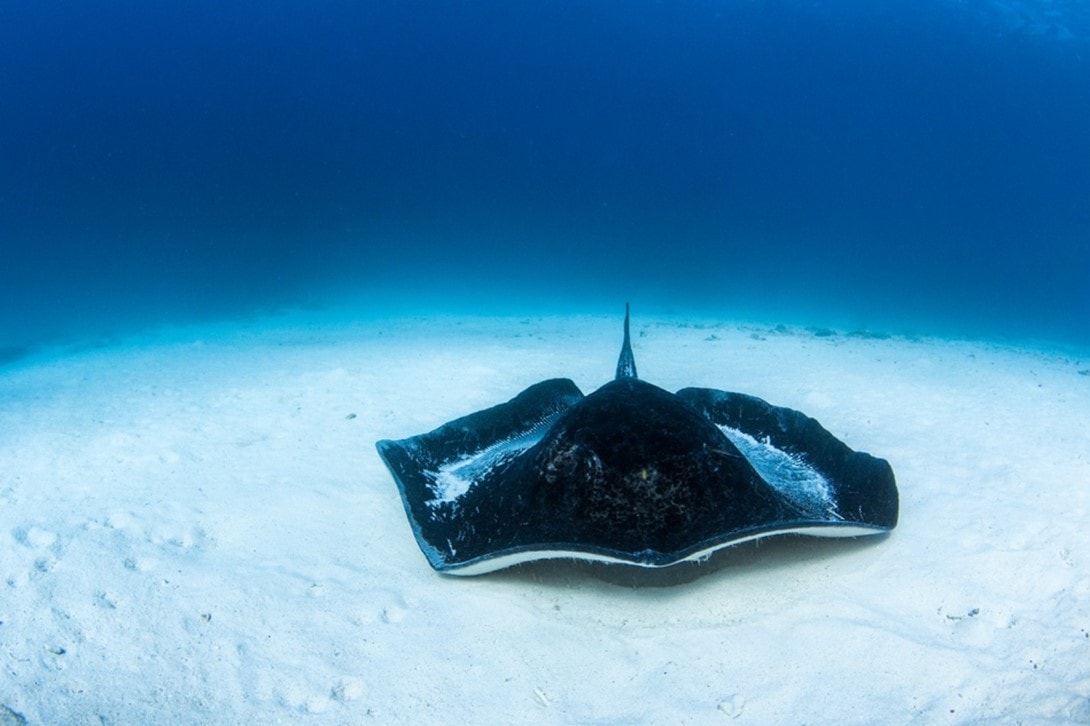 Likelihood of sighting: These rays are sighted here and there, but not frequently. They can be seen anywhere on the Western side in shallow or deep water.

Location of image: Large sand patch on Western side of the island.

Information: The blotched fantail ray is known by a variety of common names and is equipped with a stinging spine at the base of its tail. These rays are often sighted resting on the sea floor or in a group of around 4 – 5 travelling across the reef. Their colouration and pattern varies between individuals. 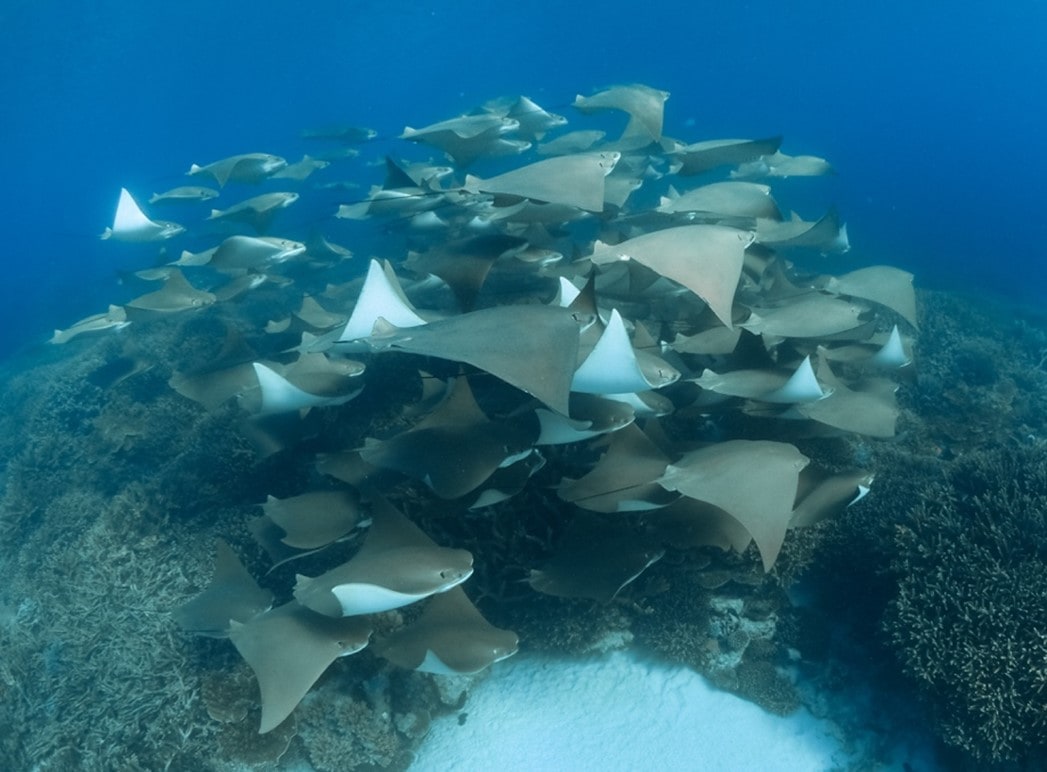 Likelihood of sighting: Very rare. This fever of rays was seen for several days in early 2021. They have been seen in smaller fevers, or alone.

Location of image: 30 m out of the Lighthouse Quayway

Information: These rays are named after their unique physical appearance and bi-lobed heads. They are often seen at the surface in large fevers, but little is known about their distribution patterns. This species is a foraging predator that specializes on shelled, invertebrate prey including clams, snails, lobsters, oysters and crabs 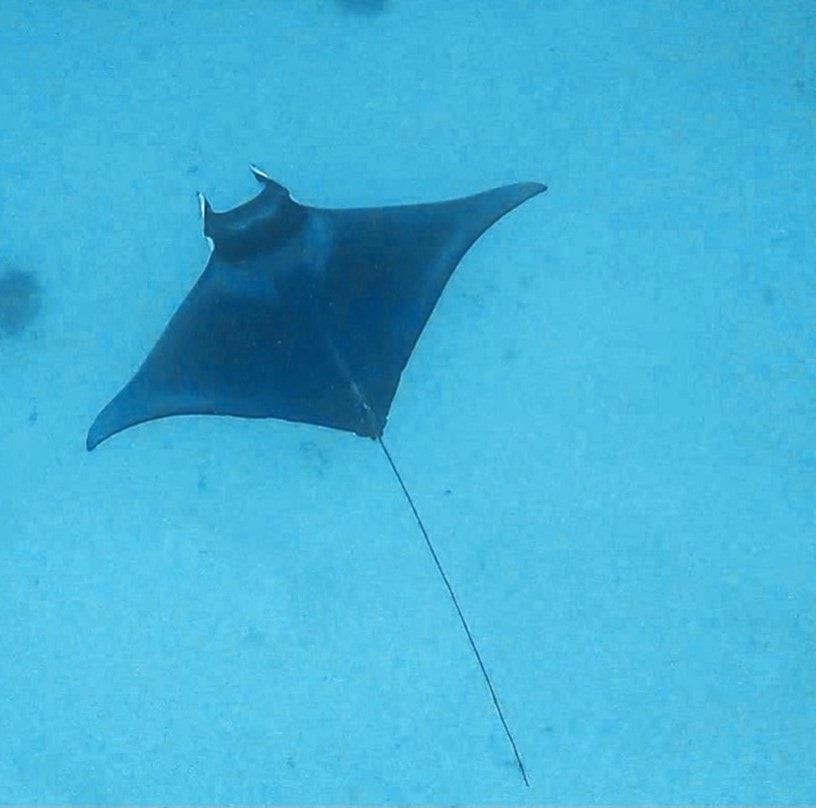 Location of image: Western side of the island

Information:  These rays grow up to 3.2 m in disc width and can weigh up to 300 kg. The species has a global distribution in tropical and temperate waters and is assessed as Endangered due to continued population declines due to targeted fisheries and bycatch. 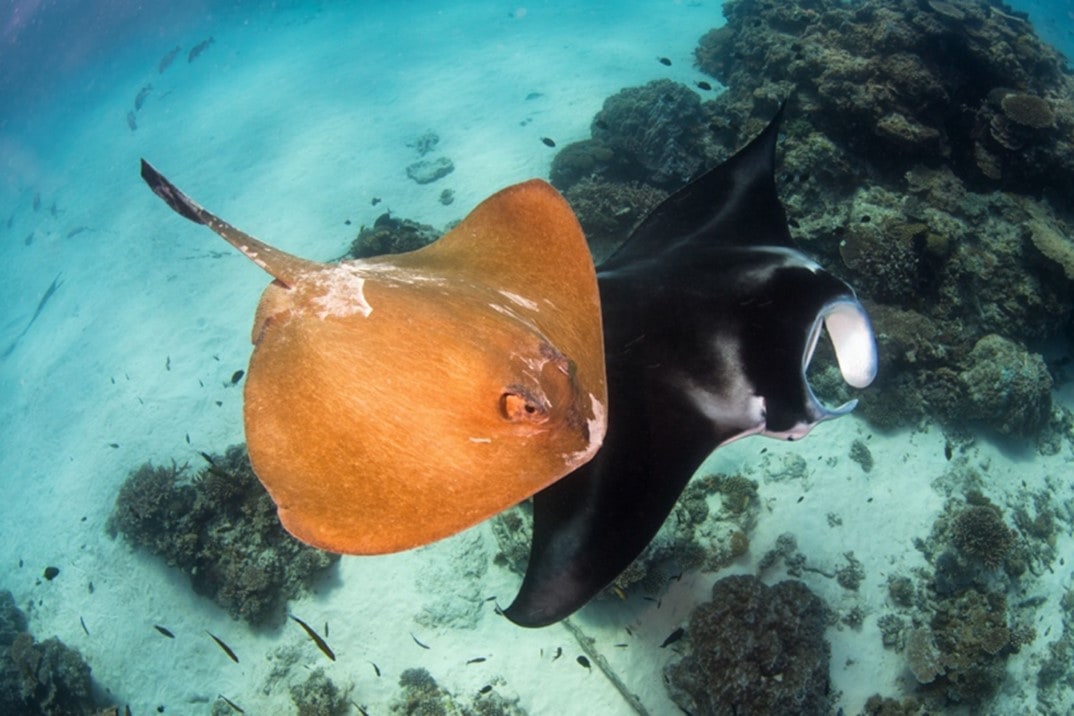 Likelihood of sighting: Very likely. These rays are common around the island, especially in the early morning and late afternoon. They will rest on the sea floor on the sandy areas and some have even been sighted swimming through the lagoon

Information: This species of ray is widespread and sighted frequently on the Southern Great Barrier Reef. Their maximum size is around 2 m disc width and 3 m long (including their tail). They possess a stinging barb at the base of the tail and in have been collected for use as leather in some countries. 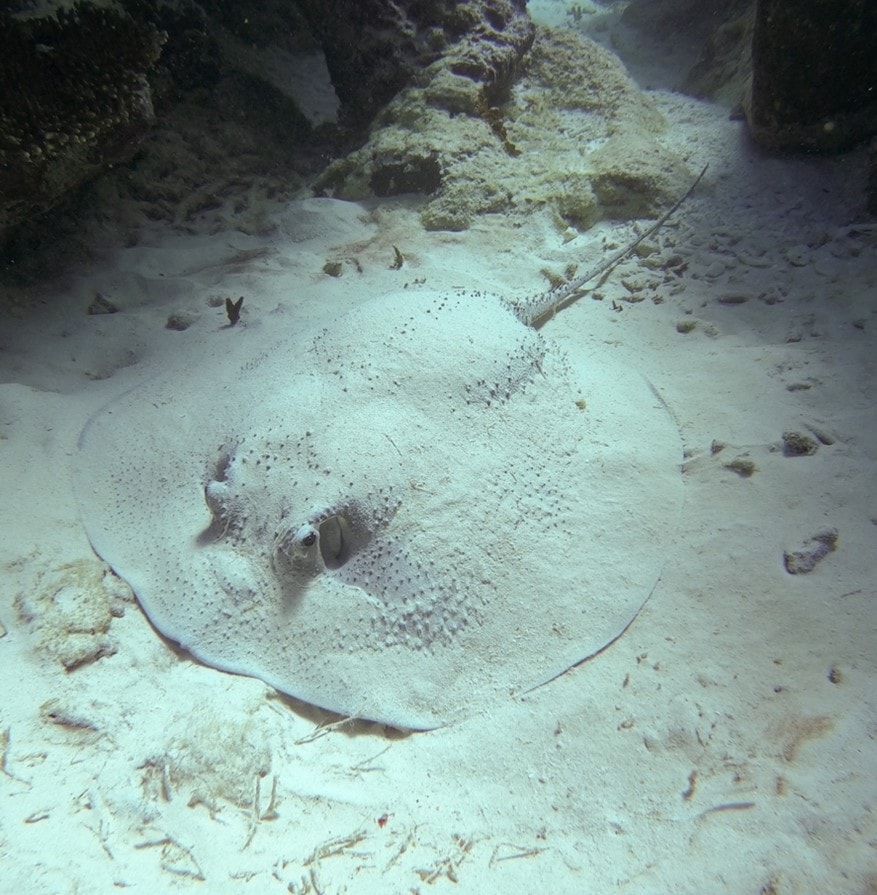 Likelihood of sighting: These rays can be sighted on sand patches or tucked underneath coral ledges. Most frequently sighted along the large sand patch beside the lighthouse snorkel line and at second reef.

Information: Porcupine rays are easily identified by the prickly thorns carpeting their bodies. While these rays do not possess a stinging barb, each one of these thorns is very abrasive and can cause injury. Their skin is used in several countries to make leather, contributing to their declining population trend. Porcupine rays can reach a maximum disc width of 1.5 m. 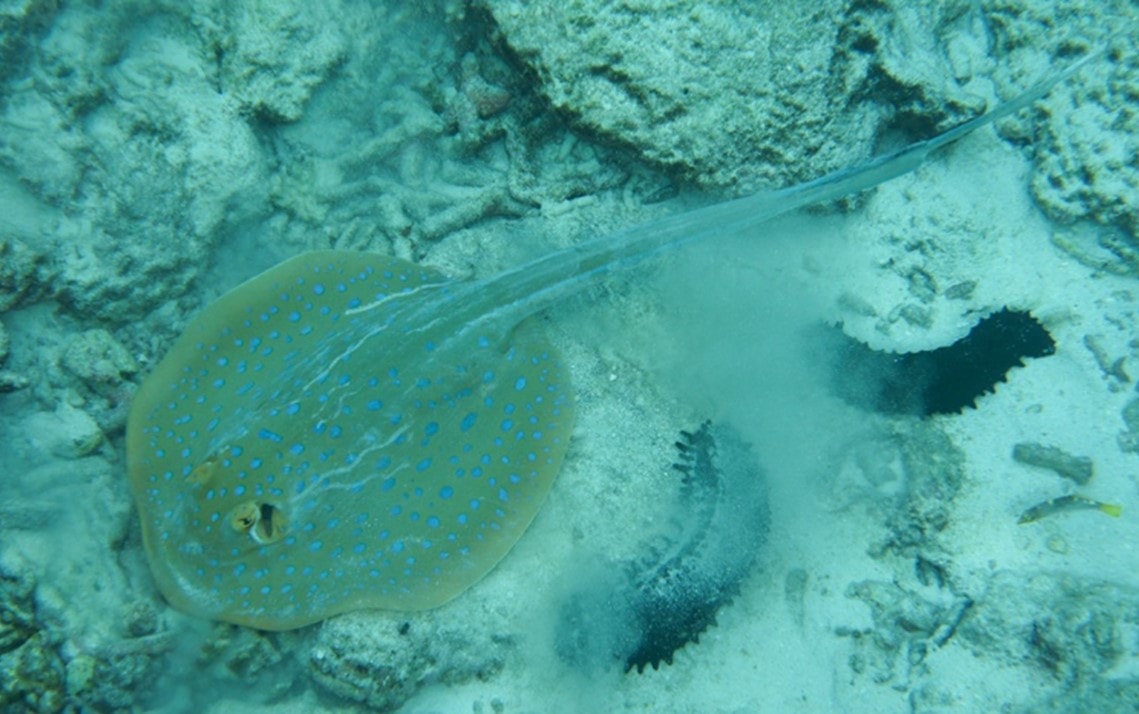 Likelihood of sighting: Frequently sighted in the lagoon, also seen foraging in the lighthouse quayway and along the edge of the reef on the western side of the island.

Location of image: Shallow reef on Western side.

Information: Frequently referred to as the blue spotted lagoon ray, these animals are generally sighted between depths of 10 cm to 10 m. Their maximum size is around 35 cm disc width, and they are generally seen foraging for food with the assistance of their ampullae of lorenzini.

Thank you for reading this blog, we hope it assists you in ray identification while on Lady Elliot Island! For more fascinating information please see the below resources: